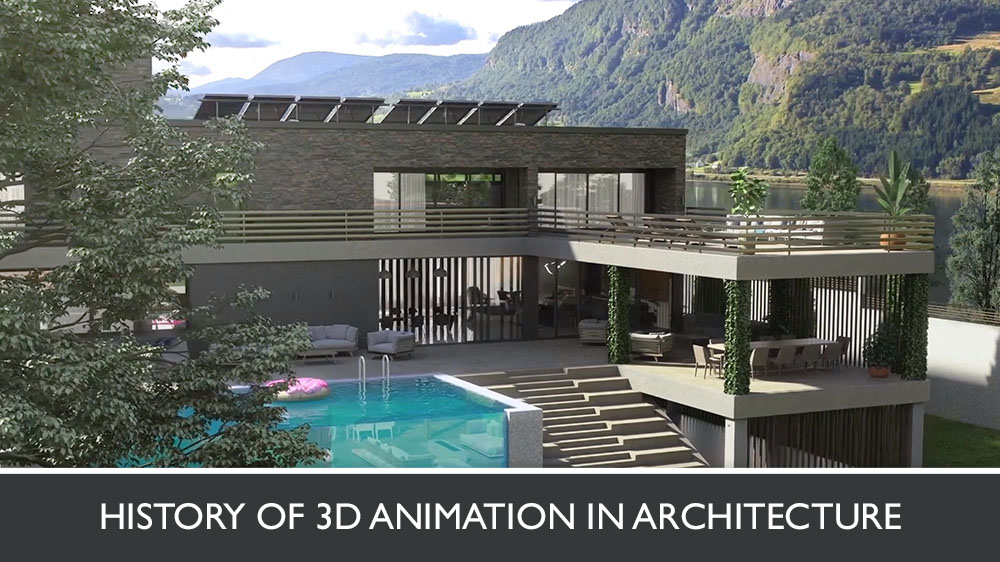 CGI videos have made the lives of thousands of architects around the world easier. That’s because modern 3D graphics allow for visualizing architecture designs as if they are already constructed before they are completed. Now, 3D animation is commonplace, so it’s hard to imagine things being different before. But, even 20 years ago the level of technology we have today seemed either difficult to achieve or too expensive to be viable any time soon. And before that photoreal CGI architectural animation was believed to be science fiction. So, how did we get here?

To understand how computer animation in architecture emerged and achieved such heights, let’s delve into its history. We’ll go through the first CAD projects to the current level of technology. Also, we’ll get to know what the future holds for the industry. Join us for a brief rundown of 3D architectural animation!

One of the most important milestones in the overall history of computer animation was 1958’s “Vertigo” movie with its mind-blowing (for its time) computer-animated intro. But the first steps of truly modern computer-made visuals were made in the 1960s. In that time, it first became possible to replace text-based input with graphical user interfaces, or GUIs for short. It was with the help of the Sketchpad program that established the way 3D artists work to this day. It was created by the American computer scientist Ivan Sutherland. This program is the first piece of computer-aided design software or CAD. It was used to create simple three-dimensional objects — cubes and prisms — from drawings, as well as to animate the basic movement of those objects in a digital space.

A couple of years later, Edward Catmull, another prominent American computer scientist, created the first complex 3D model — a 3D rendition of his wrist. He also developed Z-buffering — a crucial algorithm for texture application. Finally, the first fully-fledged short 3D animation was made by James Blinn, one more gifted IT scientist. His later achievements include 1983’s “Voyager” fly-by 3D video and pioneering CGI on television with Carl Sagan’s “Cosmos: A Personal Voyage”, “Project MATHEMATICS!” and “The Mechanical Universe”. Not exactly an achievement for computer animation in architecture, but it was a crucial step to gorgeous photoreal 3D videos that architects use for presentations today.

The 90s can be easily seen as the “golden age” for CGI in general. Everyone jumped on the popular bandwagon, bringing money and innovation. “Babylon 5” introduced the first fully computer-generated movie sets, Pixar made the first full-feature length CGI film — the iconic “Toy Story”, “Terminator 2” with its 3D-animated morphing. And how can we forget “The Matrix” that pushed the boundaries of what first Cinema 4D, Houdini, VRay, and Autodesk software could do!

But what did it do for architecture? Most architects still used traditional blueprints and sketches for presentations and marketing at that time. The only form of 3D imagery that was popular at the time was BIM, or building information models, for construction planning. The important part about this historical period is the honing of CGI technology — better, deeper textures, more powerful modeling, rendering and animation software, as well as setting the course for lowering costs and effort for creating animations.

Want to know the cost of your CGI project?

Contact us to learn the exact price of your 3D animation!
GET YOUR PROJECT ESTIMATED

The beginning of Millenium mostly continued to develop 90’s trends further. More realism, organic integration of special effects, HD textures. One of the more important developments for this age is 2001’s “Rendering Translucent Materials”, which made photorealistic multi-source lighting possible for moving imagery.

Advancements were also made in realistically simulating different materials — water, cloth, wood, stone, and metals. It is extremely important because materials in 3D animation are much more than moving textures. They are complex algorithms that define the way items look and feel. Even something seemingly simple, like bricks, has a particular way of absorbing and reflecting light, and a small error can result in the lack of realism in the footage. Another thing from the 2000s that contributed to computer animation in architecture is 3D video stabilization. It prevents the “tearing” effect, which results in much smoother camera movement.

By the end of the 2000s, architects have recognized the immense potential of 3D motion graphics and started to use it for design visualization and presentations. However, the computer graphics hype has died down a lot, and 3D animation was not seen as good-looking enough or financially sound in that period. Still, the moment architectural computer-generated movies blew up was just around the corner.

The past decade was the one that really popularized residential 3D animation among the architecture community, and for a good reason. All 3D modeling and rendering software received comprehensive updates that streamlined and automated 3D model creation as well as expanded upon motion graphics. Even though rendering professional computer animation in architecture requires a powerful PC to this day, it got relatively cheaper to what it used to be. Photoreal 3D videos could be made with an average computer. And it became much easier to learn how to create them thanks to commonplace Internet classes and user-friendly programs.

And this brings us to 2020. Photorealistic computer animation in architecture is a giant industry, with hundreds of studios around the world competing for clients. Commercial and residential projects can be brought to life with not just regular motion graphics. They can be displayed using technological breakthroughs such as VR and AR. Architects can let their creativity loose with 3D sculpting, material simulation indistinguishable from real life and the possibility of placing 3D models of buildings into any location seamlessly as they belong there.

What does the future hold, though? Computer-generated visuals still have a lot of untapped potential but some trends can be predicted. Augmented reality, virtual reality, and hologram technologies are getting more advanced and accessible every year. It is bound to completely change the way architects present their projects. Imagine a complete simulation of a house design, which prospects will be able to experience not just visually, but also touch and walk around in, move objects with their own hands, even feel the breeze from the balcony. And this tool to seal the deal is carefully modeled, rendered and animated by a team of professionals for a reasonable price. Sounds like science fiction? They said the same about AR just twenty years ago! And now everyone can interact with 3D virtual objects projected onto real environments using their smartphones and portable computers.

We hope you found this crash-course about the history of computer animation in architecture informative and entertaining. Do you want to visualize your exterior or interior design projects in all their glory? Get high-quality animated 3D visuals with our architectural animation services!

GET YOUR PROJECT ESTIMATED

To impress your clients with a show-stopping 3D animation

Want to join the discussion?
Feel free to contribute!

RESIDENTIAL 3D ANIMATION: 5 WAYS IT MAKES VIEWERS DREAM TO MOVE IN A PRESENTED...

3D ANIMATION DESIGN SERVICES: 5 CASES WHEN THEY SAVE AN ARCHITECT’S D...
Scroll to top